as mentioned in previous posts apache openwebbeans is very flexible.

owb is based on a simple plugin architecture which allows to customize parts easily.
some years ago i published an add-on for owb which allows to inject remote-ejbs via @EJB into cdi-beans in non-ee environments.
the add-on injects references resolved by a custom ejb-resolver into injection-points annotated with @EJB.

with the same approach it's possible to use 3rd party annotations in cdi-beans.
today i prototyped a similar add-on for owb, which allows to use @Autowired in cdi-beans to inject spring-beans based on the (field-)name or type. compared to the cdi-spring bridge i described here, it allows a simpler implementation which delegates to a started spring-container (instead of bootstrapping it). the major downside is that it isn't a portable cdi-extension (per definition) and therefore you can only use it with owb. furthermore, there is no validation of those injection-points during the startup you (might) know from cdi and injection of cdi-beans into spring-beans isn't supported as well.
Posted by Gerhard Petracek um 7:58 PM

[deltaspike] restricting the amount of windows

with codi it was possible to restrict the number of windows and old windows are dropped if the maximum was reached and a new window should get created.
deltaspike doesn't allow that before v1.1.0, however, it's very easy to implement it manually:
Posted by Gerhard Petracek um 8:00 AM 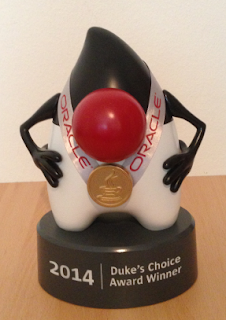