there are several examples for myfaces codi in the myfaces-repository. most of them are just dev examples esp. for an easier communication between members of the dev team. users might be confused because they don't know the intention of the details. therefore, i started with the first hello-world example which will be shipped with the next release. currently the example shows some simple use-cases. you will see further examples in the near future. all examples (which are available in the myfaces-repository) with the official myfaces-stylesheet might be interesting for users.

screenshot of the first example: 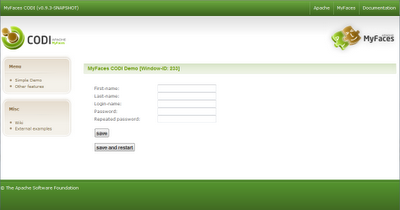 Posted by Gerhard Petracek um 12:11 AM

Posted by Gerhard Petracek um 8:10 AM

thx to matthias we have a first demo based on apache technologies which is deployed to a cloud infrastructure. as you can see the demo also includes myfaces codi!
Posted by Gerhard Petracek um 4:30 PM